Wrapping up Seven Days with the 1954 Himalaya Automatic

This post originally aired in Tempus Fugit back in 2015.

So seven days have come and gone, and it is time for the Lip 1954 Himalaya Automatic to pack its bag for the return flight to Besançon.
I would have to start out by saying that this is the first French watch (to my knowledge) that I have ever worn for any extended period of time.
Per the folks at Lip, although the movement is from the good folks at Miyota (Citizen) this little horological wrist-bound bijoux was assembled just west of Switzerland in Besançon, France. 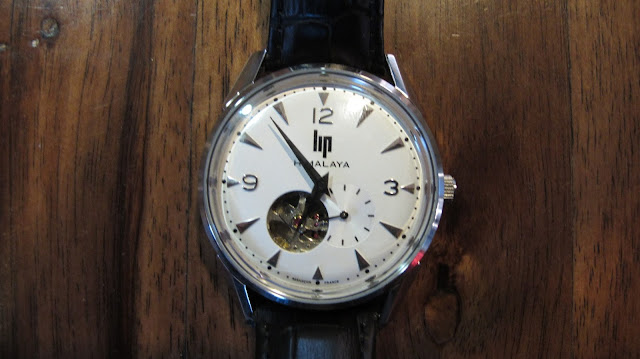 Lip is a brand that many of you might be aware of,  but some of you "New Jacks" out there might have missed.  Lip is to France what Seiko (and Citizen if we're being fair) is to Japan.  With customers like General de Gaulle, well let's just say you've ingrained yourself in the French psyche.

The watch that Lip sent for review is a reinterpretation of one of their "Historical" collections - The 1954 Himalaya Automatic.  As the name suggests, the original design dates back to 1954.

The original pr material said:
"Nine out of ten of the best alpinists have chosen the Himalaya watch for its incredible resistance to elements and impacts".

Noted climbers Maurice Herzog wore one for his ascent of Annapurna I.  And for those of us who traverse the globe on two wheels, fortified by red wine and sausage sandwiches it bears note that per Lip, the Himalaya was also a prize given to the daily stage winners in Le Tour de France.  Who knows, perhaps "Monsieur Chrono" (the son of a builder from Normandy also known as Jacques Anquetil) picked one up back in the day for his July exploits ; )
But that was then, this is now.  Lip is still offering watches at wonderfully friendly price points.  But the question for many of us who write about this stuff was, essentially, is this just a mass produced throw-away trip down memory lane, or are these real watches? 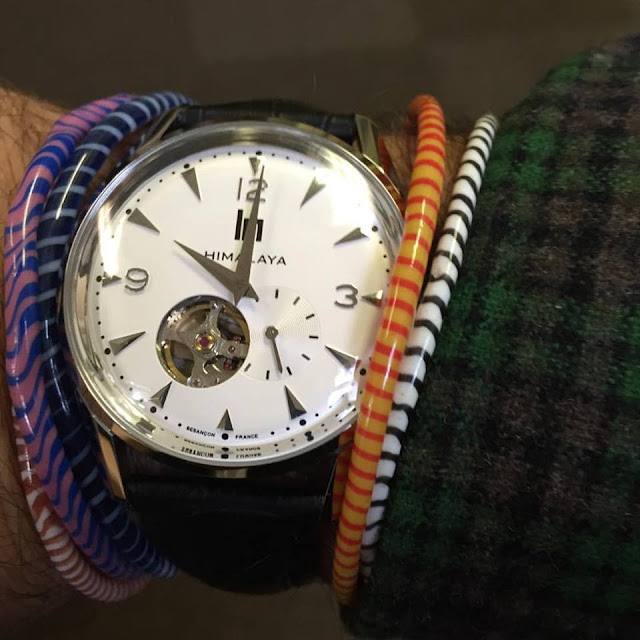 Well, if the 1954 Himalaya Automatic is anything to go by, Lip is making some REALLY COOL watches!  Although staying true to the original design, the new Himalaya features a "heart beat" dial, and I suspect is a wee bit larger than the original. 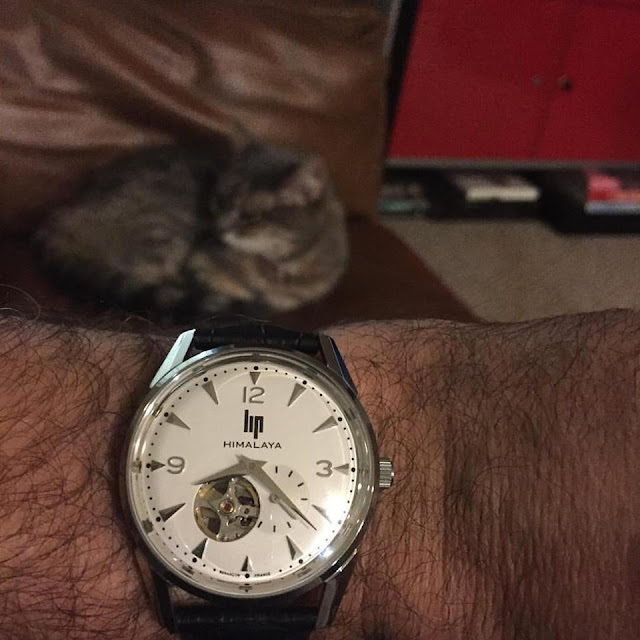 The case is 40 mm in diameter, and is constructed of stainless steel.  It is warranted to 50 meters of water resistance.  The finish is smooth and (very) pleasant to the touch.  The lugs are certainly wonderful visually, but they are EXTREMELY well finished.  Watches at this price point are often stamped by a mass press.  And they look and feel that way.  The Himalaya has plenty of straight lines, but they are all smooth the the touch.

The watch fits perfectly, with the lugs just covering the two wrist bones.  And the more I think about it - 40 mm is really as big you need (or should want) to go. 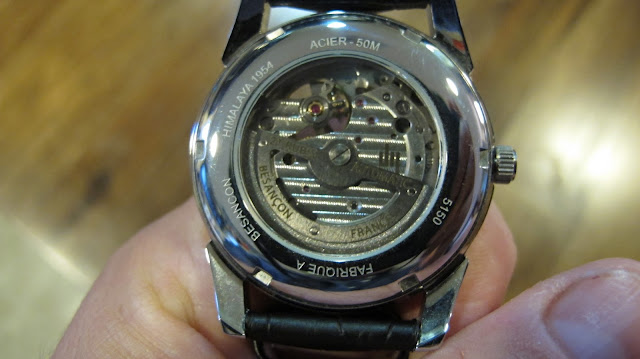 The movement is the Miyota 82S5 and features a nice engraving noting where the watch was assembled.  But what I (and I think any true watch geek) appreciate is that in their marketing material Lip does not try to shine us on by "re-dubbing" the movement as a Lip reference like so many other brands do.  They proudly, and rightly inform the customer of what they are using, so the customer can know exactly what they are getting.  Pretty crazy idea in the world of smoke and mirrors polluting  the watch business these days - I like it! 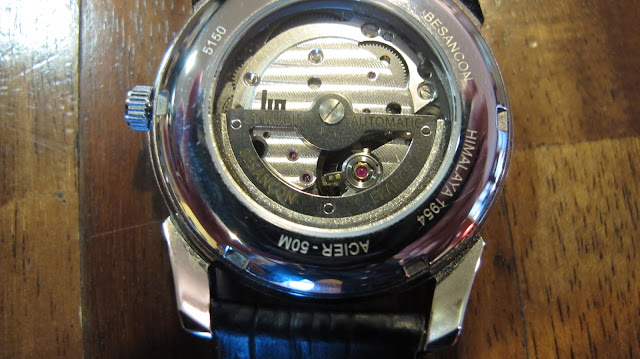 The 1954 Himalaya Automatic was easy to set and could be hand-wound from a dead stop. The crown was tactile and the winding action was incredibly smooth. 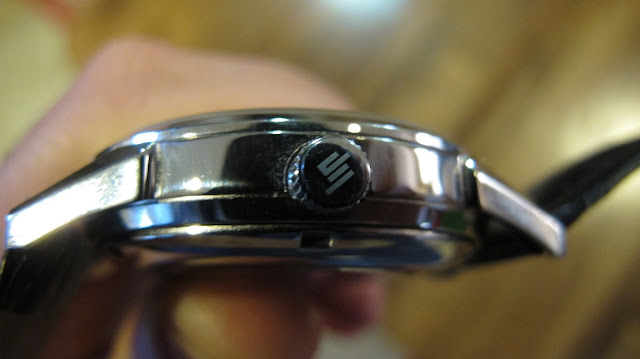 The time keeping was very, very good with a maximum of 18 seconds (slow) deviation over the seven days. The power reserve was strong, and I suspect over a longer period as the watch synced with my movements, it would have been even more accurate. 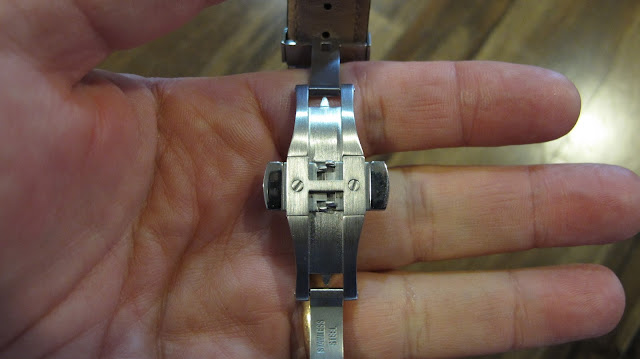 Lip paid close attention to the points that many other brands view as " necessary" but not necessarily important.  Lip chose a butterfly clasp for the deployment.  Over time I have come to really NOT LIKE the "fold-over" deployment as it tends to rub one side of the wrist unless your wrist is that "magic" size allowing a perfect fit. 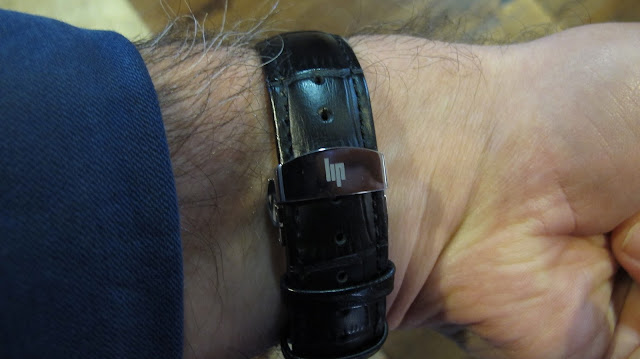 The leather was soft and comfortable right away, not needing any "break in" period.  The strap is calf skin with a printed pattern.

And like the Stowa Back to Bauhaus the Lip was a real traffic stopper on the street.  I was stopped fairly frequently and asked about it, about Lip - "is that really a watch company's name?", what I thought about it, where to buy one.  That is a good sign that a watch company is on a good path.

Lastly, let's think about one of the key factors driving new watch purchases these days - bang for the buck.  For better or worse, the potential watch customer is armed with a lot of information - some good hand some bad to be sure.  More and more there is a draw towards brands with real history, a real story, and REAL quality.  When these attributes can be found at a very reasonable price point, that is a watch that people should - and will be attracted to.  I would buy this watch and wear it proudly.  But then again, that is one man's opinion ; )

For those of you obsessed with the numbers, here they are some soft ones -

All comments are moderated. Please be patient. And please, most importantly? Please don't spam ; )